The heroes make their way back to Death’s Hill with the evil statue (smaller now due to the loss of Flashfire).

The first two turns go without much incident. The statue creates a guard on each turn and the heroes move up slowly (The three slow moving models are now in a group and are being ‘commanded’ by Jareth).

On the third turn, the statue fails to create a guard even with a hero reroll. Most of the heroes again move forward, but Xaria casts a 3 power transfix which does nothing and Erdan shoots, but does nothing.

On the fourth turn, the statue creates a guard, but uses the final hero reroll in the process. Xaria casts a magical bolt and Erdan shoots, but again nothing happens. 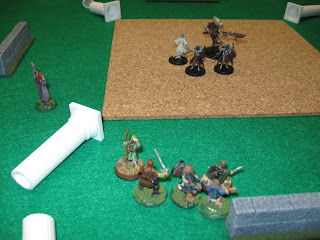 See what strategy can do for the game - Go Leaders!
On the fifth turn, the statue makes a fourth guard. The slow-moving group has finally made it to the edge of the hilltop. Xaria again tries to transfix and Erdan tries to shoot a guard to no effect (I’m seeing a pattern here).

The sixth turn happens with the statue creating a guard and Jareth failing 2 dice on his activation ending the turn. Thankfully, the seventh turn, the statue does nothing. Pip, Selena and Durgon move onto the hilltop and Xaria fails to cast a spell and the momentum shifts (she failed 2 activation dice).

The eight turn sees the first hero death as Pip falls to his aggressor (the classic 1 against a 6 - 3+1 v 3+6). The statue transfixes Selena. Durgon kills the fallen guard (that Selena knocked down) and Selena shakes off the transfix effect, but little else happens (Xaria casts a low powered bolt, but the guard is unaffected – and ends the turn in the process).

The ninth turn has a guard knock down Selena, but no other guards manage to exploit the opening (I thankfully rolled a lot of ones for the guards) and the statue fails to do anything. Selena stands up while Xaria fails to transfix the nearest guard. Durgon and Erdan climb to the top of the hilltop. 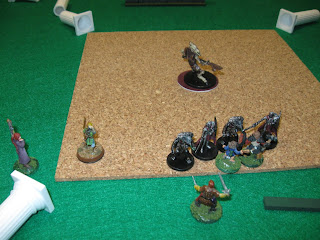 If I lose one more model, I'll have to take a morale check.
Turn 10: Selena is powerfully attacked and is killed (with a second guard in contact and the powerfully attack, it was 0 to 3 in favor of the guard). The guard to attack Durgon rolls snake eyes and the turn ends there for the statue. Durgon kills the guard in combat with him with a powerful attack.

Turn 11: Durgon is attacked twice, but is pushed back and then pushes his second attacker back. The statue tries and fails to entangle Erdan. All heroes are now on the hilltop.

Turn 12: The first guard moves but can’t attack Durgon. The second guard powerfully attacks Durgon, but is knocked down in the process. The Statue fails to make a guard. 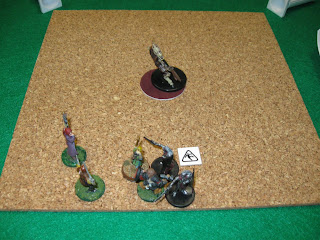 If we can get rid of these two guards, we might have a chance!

Erdan kills the fallen guard, but fails to make his terror check and can’t move into melee with the statue (he moves to help Durgon with the last guard instead). Xaria casts a powerful transfix spell at the statue and even with its magic resistance, it fails the roll and is transfixed! Jareth makes his move and attacks the transfixed statue with a powerful attack but fails to destroy the mighty statue. Durgon knocks down the final guard.

Turn 14: The statue fails to recover from the spell and Durgon destroys the statue with a powerfully attacks (6+3 v 5+3).

I get 30 gold for winning the scenario! However, the scenario states that I should get 20xp for destroying the statue and 4xp per guard. In the base campaign rules, that would be 40xp. If you include the 8 guards I killed in the first game (can’t believe that I killed that many guards), I should have about 72xp or 144 points to buy characters with – almost three times what I can do with my current funds.

So, to update this scenario to the campaign rules in Song of Deeds and Glory (if I may be so bold), I’m going to state that killing the statue is worth an extra 1d6x5 gold coins and each guard killed is worth a single gold (perhaps there were some precious gems used in the rituals)... With my dice rolls, that’s an extra 30 gold for the second game (If you think about it, my average with 5 guards killed would be (~57.5 gold and a campaign point, close to the purchase power of 40xp). If you add the 8 gold from the guards killed in my first time, I have a total of 83 gold.

In searching the surrounding lands, we stumbled upon an old alehouse which we manage to cut a deal with the proprietor and will always have a stock of ale if we need it. Durgon all shook up about the loss of Flashfire and injured forgot about the ale we found, but decides to learn the trade from the current brewmaster and is making some pretty good ale (added the special Brewmaster to Durgon).

With my stash of gold I recruit a human warrior (Q3+ C3) for 30 gold and a human barbarian (Q3+ C3 – Fearless, Giant Slayer) for 42 gold which leaves me with 11 gold. With the campaign point, I purchase “Retaining the Initiative”.

The experience: This scenario is still fun and worth a second go. First of all, I rolled a lot better this time. There weren’t as many turnovers as in the first game and I think that was in part me remembering to use a group move for the slower lower quality characters. I had to take a chance with my heroes when I first went on the hill and I paid the price really early. Losing two characters so quickly made me pretty worried about the ending (lethal against personalities is scary, but really makes this scenario shine). With only 4 members left another death would have been a morale check and we saw what that could do. In the end, casting a transfix spell on the statue was what really won the day.

Posted by Brendan Mayhugh at 1:02 AM

I am up in the southern part of the Circle City, maybe we should make set a play date sometime, or, at least touch bases.

Sounds like a plan. Hard to determine a game plan with Mother Nature dumping all this snow on us! Still a little actual face-to-face SBH sounds fun!