Again I headed to the LGS today with ATZ, some buildings and zombies. A friend of mine had a buddy in town and wanted to play some THW games. Since I’m a bigger fan of ATZ than 5150 (currently) I set up a simple ‘town’ and away we went. Each player was to start with a rep 4 civilian star (rolling two abilities and picking the one to keep). A fourth player wanted to try it out, so we split into two teams playing on a 4x6 board.


It didn’t go well… The end game was two idling cars and two turns of no action by the humans allowing the zeds to swarm both cars. One car (driven by me) managed to kill all the on zeds attacking while idling only to hit a zed and flip the car putting both passengers out of the fight! 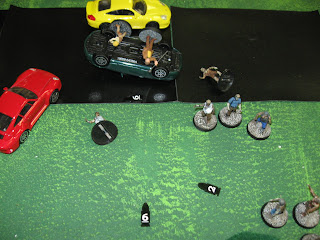 There is our car, flipped with both humans OOF and no one to help them.
The other car was attacked and the driver was put out of the fight. The passenger was able to drive the car out of the area, but not before kicking the driver to the curb. In the zombie apocalypse, everything goes. 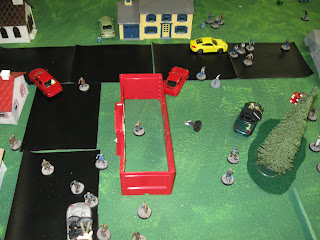 You can see where both cars are and why we were doomed to fail, 24 dice per turn!

Results: 3 KIA, 1 survived
----------------
Game 2:
Another person who was watching was asked and decided to play. We moved to being gangers trying to take back the suburban area. Again each player is a rep 4 star. The first building held two gangers and the talk-the-talk moved to walk-the-walk and the enemy ganger leader (rep 4) gets the drop on our guy and fires a shotgun blast. Only the cover of the building and the bad die rolling saved our guy who fired his BA pistol dropping the guy! The other ganger makes his checks and will fire back when next active. In the end, our two guys manage to drop the guy, but now 7 zombies are busting at the doors and the two gangers leave the two OOF guys to act as food to slow the zombies. Our group now having about 15 to 20 zeds in the area begins to run off. 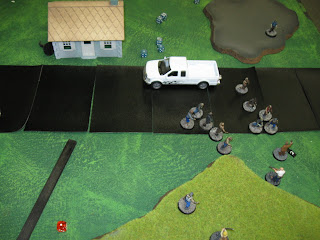 Here we have three of our gangers looking down 11 closely zed! 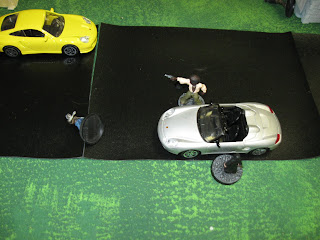 Here is our other two gangers checking cars and hitting zeds!
A car alarm goes off and all gangers hid in a building finding a sixth ganger (another person wanted to play) allowing the 20-25 zeds move slowly towards the alarming car (I decided that on doubles, a random effect would occur if that player rolled doubles again and a double 4 was car alarm). The zombies stay in the area for 5 turns until the alarm shuts off and the zeds begin to move again. We decide that it has gotten out of hand and attempt to flee. Splitting up, two jump into a car and the rest run to the other (we… er… one of us found two sets of keys). While heading to the cars, one of us happened to be within 12 inches of the zeek swarm who came from behind a building and an In Sight test later, all 30+ zombies begin to shuffle towards us. 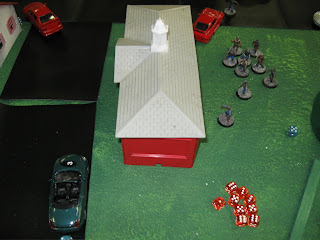 The alarm of the car at the bottom of the picture is going off creating a possible 3 zeds a turn, but steering the zeds away from the humans...
One of us (the newbie) decides that he wants the shotgun and machine pistol that the two food… er… dead gangers and heads off. The zombie swarm follows. One car races off the board but the second fails to start, but it breaks about 10 zeds to turn about towards the car. The newbie tries to catch up to the car dragging the other 20 back towards the second car.
I flee toward the edge where the first car fled since I didn’t make it to the car, but the zeds created by that noise are able to charge (well actually one of them and even though I was a knifeman with a blade, I fail in combat going OOF). The newbie tried to check on me and head off, but before he was able to check me, 4 zeds are able to charge him and he also goes OOF. We keep zeds busy for 4 turns! 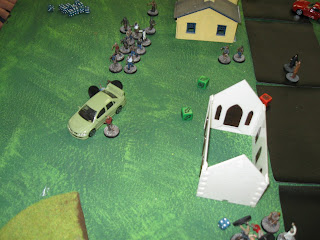 The second car has taken down (ran over) 14 zeds and made every check...
Meanwhile, the second car gets moving and begins to head off the map. With a turn of no player activations, the swarm catches up to them. The driver makes 24 successful “out of control” checks doing donuts running over the zeds before being able to move themselves. There are two zeds in the way and the car lurches forward killing one and knocking the second one. On the final zed until freedom, the driver loses control of the vehicle flipping it and causing both occupants to go OOF. The zombies slowly move over to the car finishing off the last of the two gangers… 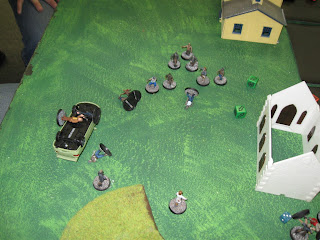 Even if you make 25 checks, it's the one you fail that matters!

Results: 2 survivors (car with 1 unit of fuel), 4 KIA. One of the survivors goes up a rep becoming a rep 5!

------------------
Game 3:
We decided to play a third game with those that died having a 50-50% chance in losing a rep. It turns out that of the 4 dead, I’m the only one that is a rep 3 (athlete) and our newly created leader decides to head to another suburban area with a military outpost in it to collect some resources. With the rep 5 ganger leader and some really great die rolls, we are able to make short work of the area barely making a dent in my 48 zombie horde (we learned our lesson I guess). At the time that we left, we had only 5 zeds on the board (and two gangers hanging out in the top floor of the military building).
Results: 6 Survive (3 are now Rep 5, 2 stay at Rep 4 and 1 goes to Rep 4). We found a machete, 9 units of food, some meds, a bow, but not a single drop of fuel. Looks like we are hoofing it to our next location…

Whew! This was a long report. I think I am going to run a couple of these at the local gaming convention in March. I need more zeds, some ragers and a bunch of survivors. ..
Posted by Brendan Mayhugh at 9:41 PM

Was a lot of fun! I really need to get some more survivors (gangers and military actually) painted up so I can have the needed miniatures when we run into more humans (and another 20 to 40 zombies wouldn't be bad either)..

Darn it Bren! I've been missing a bunch of good stuff on your blog because you don't have a follower tag.

I got the King of the Ring rules for you in English, how you want me to send them?

Follower tag added! Send me the King of the ring rules at brendanATbrensrealmDOTcom